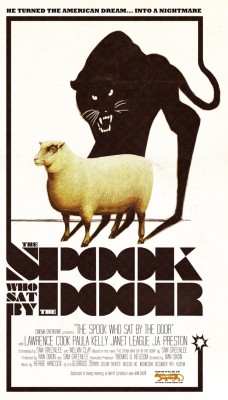 BFMM Presents, BAC in September: The Spook Who Sat...

Come on out as BLACK FOLKS MAKE MOVIES (BFMM) continues our journey through Black Film History with September’s film presentation of Sam Greenlees’s The Spook Who Sat by the Door (based on his book of the same name).

THE SPOOK WHO SAT BY THE DOOR, Sam Greenlee

The Spook Who Sat by the Door is a 1973 film based on the 1969 novel of the same name by Sam Greenlee. It is both a satire of the civil rights struggle in the United States of the late 1960s and a serious attempt to focus on the issue of black militancy. Dan Freeman, the titular protagonist, is enlisted in the Central Intelligence Agency’s elitist espionage program as its token black. After mastering agency tactics, however, he becomes disillusioned and drops out to train young Chicago blacks as “Freedom Fighters”. As a story of one man’s reaction to white ruling-class hypocrisy, the film is loosely autobiographical and personal.

The novel and the film also dramatize the CIA’s history of giving training to persons and/or groups who later utilize their specialized intelligence training against the agency – an example of “blowback.”

Directed by Ivan Dixon, co-produced by Dixon and Greenlee, from a screenplay written by Greenlee with Mel Clay, the film starred Lawrence Cook, Paula Kelly, Janet League, J. A. Preston, and David Lemieux. It was mostly shot in Gary, Indiana, because the themes of racial strife did not please Chicago’s then-mayor Richard J. Daley.

The soundtrack was composed by Herbie Hancock.[5]

In 2012, the film was added to the National Film Registry, which annually chooses 25 films that are “culturally, historically or aesthetically significant”, and are at least 10 years old.” [Wikipedia]