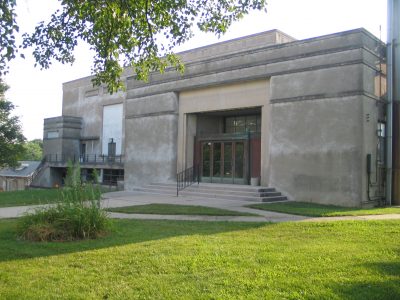 The Arts Center at Dunham is housed in one of three remaining buildings of the Dunham Hospital complex, the historic Dunham Arts Building. Dunham Hospital was the first municipally owned tuberculosis sanatorium in the United States, dating back to 1879. The Dunham Arts Building served as the arts, recreation and occupational therapy center for the residents and patients of the former Dunham Hospital. A splendid example of art deco architecture designed by Samuel Hannaford and Sons, the same firm that designed Memorial Hall, Music Hall and City Hall, the building features a large auditorium, terrazzo floors, bronze entryway, art deco fixtures and lower level classrooms. When the hospital closed its doors in the early 1970s, the property was converted to a park managed by the Cincinnati Recreation Commission and was renamed the Dunham Recreation Complex, honoring its history.

In July 2012, Sunset Players, the resident theatre group since 1980, signed a 25-year renewable lease with the City of Cincinnati for the Dunham Arts Building, saving it from probable demolition. The Dunham Arts Building has transitioned into “the Arts Center at Dunham”, a fine arts center for the west side of Cincinnati. The upper level of the building, a 350-seat performance venue, was officially reopened in the fall of 2012. The lower level is being renovated for studio and programming space. Several studio spaces are completed and have housed a variety of local artists.

Your support of the Arts Center at Dunham is greatly appreciated. Together we make arts in the community available – and affordable!