Presented by concert:nova at The Transept 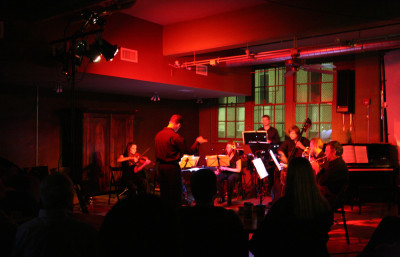 Join us in exploring the Roaring 20s where Warhol, Picasso, Stravinsky and Diaghilev gathered, blurred the lines between painting, poetry, theater and music. Jean Cocteau takes us to 1920s Paris, where the “spirit of the new” was celebrated.

As a sequel to last season’s romping Salon Cabaret, we move forward in time to les Anness folles, where the spirit of the 1920’s was irreverent, rebelliuos and dynamic artistic expression. A group of avant-garde musicians, known as Les Six, were influenced by their god father, Jean Cocteau, and took up social criticism by way of satire, producing works like Les maries de la tour Eiffel (the Wedding Party on the Eiffel Tower), a nonsensical satire on the bourgeoisie.

On February 15, join us for a pre-concert cocktail party at the Transept, beginning at 6:00 pm.
Immerse yourself in the full Roaring 20s experience by joining us for a pre-concert cocktail party! Master Mixologist Catherine Manabat is mixing up two specialty, 1920s themed cocktails featuring Ohio-based Watershed Gin. Learn the history of Roaring 20s libations while Catherine demonstrates how to mix the perfect cocktail and educates you on the booze of this iconic period. Tickets can be purchased at http://concertnova.com/tickets