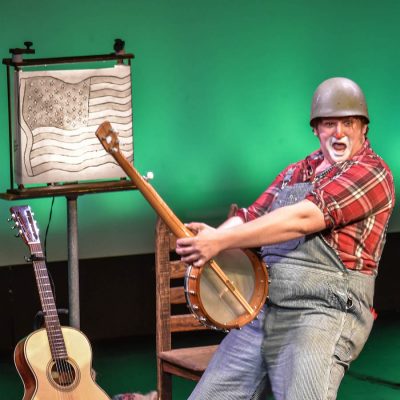 There Ain't No More!

“In his final concert an old folksinger confronts his troubled past, his legacy, and death itself with five instruments, square-dance calling, and dirty jokes in this haunting, heartfelt hootenanny. Based on legends of American Folk music. The Washington Post called it “Powerful” and “worth seeking out”.  Winner “Best Show” 2017 Orlando Fringe, “Excellence in Writing” Portfringe, 2017 “Outstanding National Act” 2017 St. Louis Fringe.”

Breaker/Fixer Productions is a collaboration between writer, performer, and “Ozark renaissance folklorist”  Willi Carlisle and theatre artist Joseph Fletcher. We create original performances at the intersection of theatre and folklore that encourage audiences to take part in their own history and discover the history of others. Our work stems from engagement with communities and often incorporates traditional art forms such as music, puppets, masks, and dance. Their first show “There Ain’t No More!” is the product of five years of research, down-home poetry, square dances, music-mentorship, and folklore in the mountains of the Arkansas Ozarks.