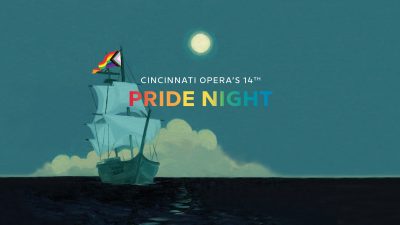 You’re invited to an evening of advocacy for visibility and equality: our 14th Pride Night, celebrating Greater Cincinnati’s LGBTQIA+ community and supporters.

Join us for a performance of the perfectly preposterous comedy The Pirates of Penzance. Then stay for a glamorous party featuring cocktails, music, light bites by A Catered Affair, and dazzling décor by Cincinnati event designer extraordinaire Joe Rigotti.

Honoring Doug Ignatius and Bruce Preston
Bruce Preston has been a fixture in the gay community since his early days in Cincinnati. His extensive community involvement includes Pride TV host, Alternating Currents Radio Show host, organizer of early Pride festivals and parades, a singing member and board member of the Cincinnati Men’s Chorus, and Artswave Pride committee member.

Doug Ignatius is a current Cincinnati Opera Board member, Vice-President of Fund Development for the Cincinnati Men’s Chorus, and former board member of the Cincinnati Shakespeare Company. Bruce and Doug are humbled to be honored by such an inclusive and prestigious arts organization that has been at the forefront of highlighting and supporting LGBTQ+ people and our stories.