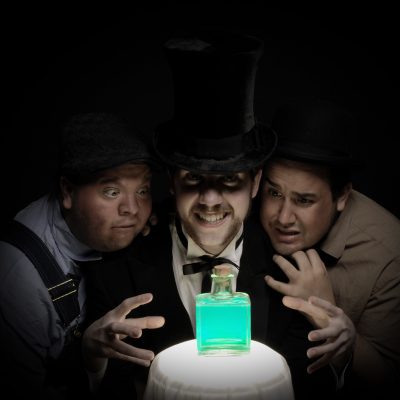 Three con-men with a tonic with seemingly miraculous properties…

A tonic with seemingly miraculous properties; Three con-men beginning to believe their own pitch; And a perfectly ordinary trunk containing…?

Four Humors strives to create art that celebrates the humor, stupidity, and beauty of our world by letting the artist connect with the audience in a vulnerable and honest way. You may have seen Four Humors artists’ work in Cincinnati in: Mortem Capiendum (2008), April Fools, Sideways Stories from Wayside School (Jason Ballweber Directed), You Only Live Forever Once,  The Finkles’ Theater Show!!! (Ryan Lear Co-Creator and Actor), The Unauthorized Autobiography of Benny Hill, We Gotta Cheer Up Gary, Bombus and Berylline, and Four Humors’ Lolita: A Three Man Show.