WHATEVER HAPPENED TO BABY JANE? 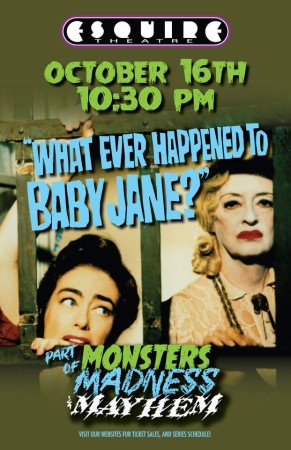 WHATEVER HAPPENED TO BABY JANE?

Part of our MONSTERS, MADNESS & MAYHEM Series ~ As a child, Baby Jane Hudson was the toast of vaudeville. As an adult, however, Baby Jane was overshadowed by her more talented sister, Blanche, who became a top movie star. Then, one night in the early ’30s, came the accident, which crippled Blanche for life and which was blamed on a drunken, jealous Jane. Flash-forward to 1962: Jane, decked out in garish chalk-white makeup, still lives with the invalid Blanche in their decaying L.A. mansion. When Jane isn’t tormenting the helpless Blanche by serving her dead rats for breakfast, she is plotting and planning her showbiz comeback. Convinced that her days are numbered if she remains in the house with her addlepated sister, Blanche desperately tries to get away, but all avenues of escape are cut off by the deranged Jane.

The Esquire Theatre, located in Clifton's Gaslight District, validates tickets for moviegoers for two hrs. of parking in the "Merchant Lot" on Howell, located one block from Ludlow Ave. (side street off Clifton Ave. -- behind the former IGA Grocery Store.) Howell Ave. is parallel to Ludlow Ave.

On-street parking is often available on -- or near -- Ludlow Ave.

Also, everyone is welcome to use the Valet Parking available in front of La Poste Eatery on Telford St. (just around the corner from the Esquire, off Ludlow). This Valet Service costs $7.00 and is available Fri. & Sat., from 5:30 -10 pm.