Presented by Women in FIlm Cincinnati at Woodward Theater 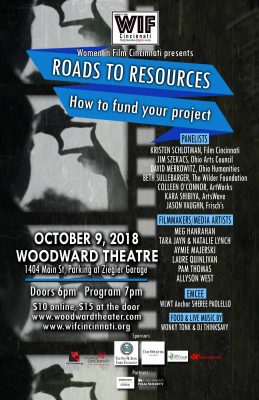 The most difficult aspect of a creative project is often how to fund it. Join us October 9 at 7 pm at Woodward Theatre and help us get more local films produced in Cincinnati. Women in Film Cincinnati is bringing together funders and filmmakers for a one-of-a-kind event on how to access funding from local foundations, arts organizations, companies and individuals.

“It took me a year to raise private funds for my PBS documentary “Cincinnati LEEDs the Nation,” says Laure Quinlivan, a local filmmaker and WIF Cincinnati Board member.  “Frisch’s Big Boy is proud to support the documentary, Cincinnati LEEDs the Nation: America’s First Net Zero Energy Police Station, as it is relevant to our guests and the communities we serve, and topically important,” says Jason Vaughn, Frisch’s CEO.  Vaughn is a panelist for the Women in Film event Oct. 9 and will discuss how supporting local storytelling can benefit a company.

Beth Sullebarger, Executive Director of The Stephen H. Wilder Foundation is also a panelist. “I believe that film and video can reach and motivate people more effectively than print media can, and there’s a need for more local foundations to underwrite local filmmakers,” says Sullebarger

WIF’s October 9 “Roads to Resources” panelists will share the criteria used to select projects for funding, deadlines and best practices. Panelists include:

Tickets are $10 online or $15 at the door. www.WoodwardTheatre.com/shows