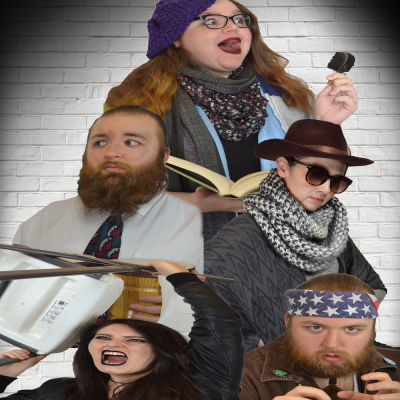 Kids in the Hall take on an amatuer open mic

from A to Z Productions (Cincinnati, OH)

The Kids in the Hall meets the American Idol open auditions in this kooky, hilarious, cringey take on the world’s most pretentious poetic evening. From Alexx Rouse (Fringe hit Buster Bumpers and Other Metaphors) and Zach Robinson (Serials 8 Favorite All’s Faire) comes the story of a ridiculous cast of horrible poets searching for the beauty in how ugly an open mic can be

A to Z Productions is pumped to make their company debut at Fringe 2018! While the company is new, Alexx Rouse and Zach Robinson are no strangers to the stage and the writer’s desk. Alexx’s writing credits at the Know include Serials (Rolling Stone, Roxy Balboa, All’s Faire) and her sold out solo show Busted Bumpers and Other Metaphors at 2017 Fringe. Zach has performed in several local improv groups (Family Bunker, Veracity), past Fringe shows (Furlesque 2016, Heard 2015) and is currently a touring member of MadCap puppets. The two of them can’t wait to make all sorts of weird funny craziness for you.

2017 CincyFringe Busted Bumpers and Other Metaphors