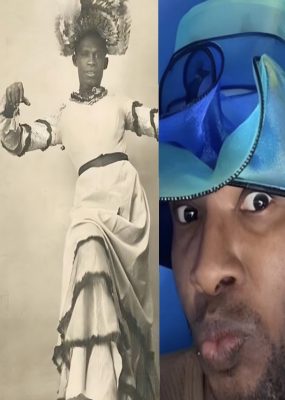 Everybody knows the real tabernacle of Dad’s kitchen is the toaster.

Part of the 2022 Cincinnati Fringe Festival!

The Real Black Swann Confessions of America’s First Black Drag Queen is the true story of William Dorsey Swann . He was a former slave who became the Queen of Drag in the 1800’s He fought racism, homophobia and became the first gay activist.

Artist Bio
Les Kurkendaal-Barrett is an actor, writer and storyteller based in Los Angeles. He has been touring Fringe Festivals around the world since 2000. He has done film, television but he has a special fondness for Fringe Festivals. He has also appeared on The Moth.

Due to the small nature of Fringe Festival venues and the tight schedule of more than 177 performances in just 2 weeks, there is No Late Seating to any Fringe Festival Event.

Tickets are available in advance at cincyfringe.com.

Tickets may also be available at your event's venue, 30 minutes before your performance, subject to availability.

We highly recommend advance purchases when you can!

Venue houses open 15 minutes prior to showtime for all performances. NO LATECOMERS WILL BE ADMITTED TO ANY PERFORMANCE. Avoid disappointment and arrive early for your shows!

50% of the value of every ticket you purchase for the Cincy Fringe goes directly to the artist who created that show! The Fringe Festival exists to foster the creation of new works. Thank you for supporting independent artists with every ticket you buy!

Part of the 2022 Cincinnati Fringe Festival!

With an ongoing pandemic, Cincy Fringe is working to ensure that artists and patrons have a fantastic, safe, and COVID-free Fringe. Updated COVID safety guidelines will be issued closer to the festival based upon pandemic conditions. Please note: Efforts to control COVID-19 exposure must be collaborative. We need participation from audiences, artists, and staff.